Conditioning for a MSW: Santa Anita vs Gulfstream 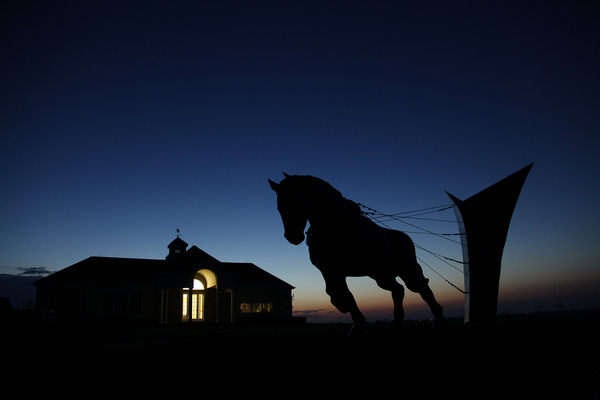 Have you ever been to Siena Farm in Paris, KY? You must go just to see the above sculpture, surely one of the world’s best works.

Today happens to open a telling window into the 2 wildly divergent preparations trainers take in order to get a runner to his/her first race. Race 3 at both Santa Anita and Gulfstream is a MSW worth approx. $50k, with SA sending 9 starters to compete over 6F, and a field of 8 racing 6.5F in Florida. That is where the similarities end, and quite abruptly I might add:

Total number of works 6F or longer in the field:
-21 at Santa Anita
-1 at Gulfstream

Avg. number of works at the race distance per starter:
-2.3 at Santa Anita
-0.13 at Gulfstream

To summarize, the average entry into a 6F MSW out West has 2-3 similar works under his belt, while 7 of the 8 starters in the East have zero such efforts.

For simplicity’s sake we can pin the SA approach to Bob Baffert, and the GP routine to Todd Pletcher. Earlier in the year we examined this matchup in greater depth here, where we highlighted the different approach to getting both The Factor and Uncle Mo back to the track after a layoff:

In retrospect, both The Factor and Uncle Mo were obliterated at the Breeder’s Cup in November. The link above states that Baffert performs better when volume is taken out of the equation – earning over $27k per start compared to Pletcher’s $17k and change.

Both trainers coming into BC2011 had 7 previous winners on the big weekend of racing, but Baffert accomplished this feat with 20 less starts than did Pletcher.

But this older post dealt with mostly older, more seasoned horses, today we are looking at maidens, and many first time starters. So, back to the subject: Why do West Coast trainers as a group work MSW stock 6F or more 21 times while East Coasters only do so once?

It’s well known the track at SA is rather hard, and the GP strip is fairly tiring – but those who train at each location must also race over the same surface, so it’s tough to buy that as an excuse.

Secondly, the common argument is ‘some horses take to more work than others’ – but that, too, fails to hold water as nearly all CA horses are sent the full race distance in this case, yet only one FL horse does so. Surely no one can claim that West Coast horses ALL require/thrive on more speed work?

Most likely it’s the copycat syndrome at work here. Trainers at each location copy what they see coming from the best – which results in horses going longer at SA where Baffert is king, and shorter at GP where Pletcher is the role model.

However, when it comes to results on the racing world’s biggest stage, the Baffert approach reins supreme as evidenced by both his Triple Crown and Breeders Cup records. Every young trainer today can choose which approach to emulate. But, why stop there? Why not consider some of the sport’s Hall of Famers from around the globe…

Anyone here remember the great TJ Smith in Australia? He took the Baffert approach to extremes with his ‘bone and muscle’ method of conditioning. Smith would put speedwork into his youngsters 3x a week – inducing nearly all of them to go off their feed.

What then? Lay off? Hell no – push forward with more training.

Those that got back into the feed tub continued on to help Mr. Smith win 33 consecutive Sydney training titles! Those who stayed off feed were sent away, as he felt it was best to find out early which had the talent to succeed. Interestingly enough, Smith seems to be one of the first to include a healthy dose of protein in his feeding program. Surely more to investigate there, but that is many steps above my pay grade.

I doubt many commercial US trainers looking to attract new owners can follow the model of TJ Smith, as no one wants to be known on the backside as the guy, or gal, who purposely conditions stock to the point where they lose appetites.

My new book will show you how to objectively determine if your horse needs the Baffert or the Pletcher approach, so stay tuned. Please see my last post on how to secure your complimentary advance .pdf copy.

One working title is ‘Internal Horsemanship – Reading the inside signals of your horse in order to gain optimal fitness.’
Traditional horsemanship is really ‘external’ in nature as one is reading the outside signs of horse health and behavior, striving to determine if one should walk, jog, gallop, or breeze on any given day. These opinions are subjective in nature, and quite valuable.

However, once that is decided, ‘internal’ horsemanship takes over and dictates precisely how far, how fast, and how frequently exercise sessions should be structured in order to maximally benefit the individual. That reminds me, I gotta stop posting and start writing this damn thing.

Posted on December 26, 2011, in Uncategorized. Bookmark the permalink. 6 Comments.

This site uses Akismet to reduce spam. Learn how your comment data is processed.